The U.K. attracts surfers all year and from all over the world, as the surf season runs from Autumn to Spring. With swells ranging from 4 to 12ft and a 360 degree swell angle, these are some of the U.K.’s best surf spots.

Being an island the U.K.’s coastline offers many beaches, with a variety of surf conditions, some quiet, others crowded. Some suited to beginners, others strictly for experts; while some beaches suit both. The bad news: as the season is mainly outside of summer (summer swells are from 1 to 4ft), you can expect very cold water and quite severe wintery weather, so don’t forget your wetsuit (as well as your boots and gloves).

Image by Robert Newall via visitdevon.co.uk

At the heart of surfing in North Devon is Croyde Bay. Popular with advanced shortboard surfers, Croyde can get busy in the summer. However, there are opportunities for beginners too, with a number of surf schools in the area such as Surf South West and Croyde Surf Academy.

Although there are larger bays nearby, (Woolacombe and Saunton), Croyde is often preferred for its faster and bigger waves. Don’t miss the Museum of British Surfing, up the road in Braunton, for surfboards through the ages and how surfing came about.

Although it’s the South West that is mostly associated with surfing in the UK, the North East, and particularly Scarborough in Yorkshire offers a few bays with excellent waves for those brave enough to face the weather and conditions of the North Sea. When the conditions do align, you can catch some perfect 10ft + waves and will find plenty of surfers out there with you.

Legend has it that this is where surfing began in the U.K. in the late 1800s, when two Hawaiian princes enjoyed “surf riding” on wooden planks on their holiday to Bridlington.

The top spots for surfing in the area are South Bay which is ideal for beginners, and Cayton Bay which is popular all year round.

Cornwall is the U.K.’s most famous area for surfing, boasting numerous beaches with great surfing conditions. There are plenty to explore, but here are a few to get you started. Fistral Beach in Newquay is Cornwall’s best known surf beach, with plenty of surf schools and surf hire centres. It will be busy, so if you’re looking to escape the crowds, keep reading.

Sennen is the most westerly beach in Cornwall, which means it is very exposed to the winds and will usually have waves throughout the summer months. It’s also one of the most beautiful and scenic surf spots.

Vast Perranporth beach is west of Newquay and is a great place to learn how to surf as it picks up a large amount of swell from the Atlantic Ocean. It also has a bustling village with lots to do and the nearby Penhale Sands is quiet with a network of sand dunes to explore.

Porthleven is best left to experienced surfers, with powerful breaks up to 12ft and waves that break in shallow water over rocks.

Portrush is the hub of surfing in Northern Ireland. There are nine popular surf beaches around the Causeway Coast, but West Strand and East Strand offer clean waves as the winds are offshore. There are surf schools, good atmosphere and lots to do being so close to the town. Whiterocks is also a popular beach in the area just outside Portrush town.

A great beach for all abilities and at the heart of Welsh surfing is Llagennith. It was voted Britain’s beat beach in 2013 and one of the top 10 beaches in Europe. The beach is 5km long and packed with waves.  Head to the northern end of the beach for the larger more powerful waves, and the southern end for less swell. 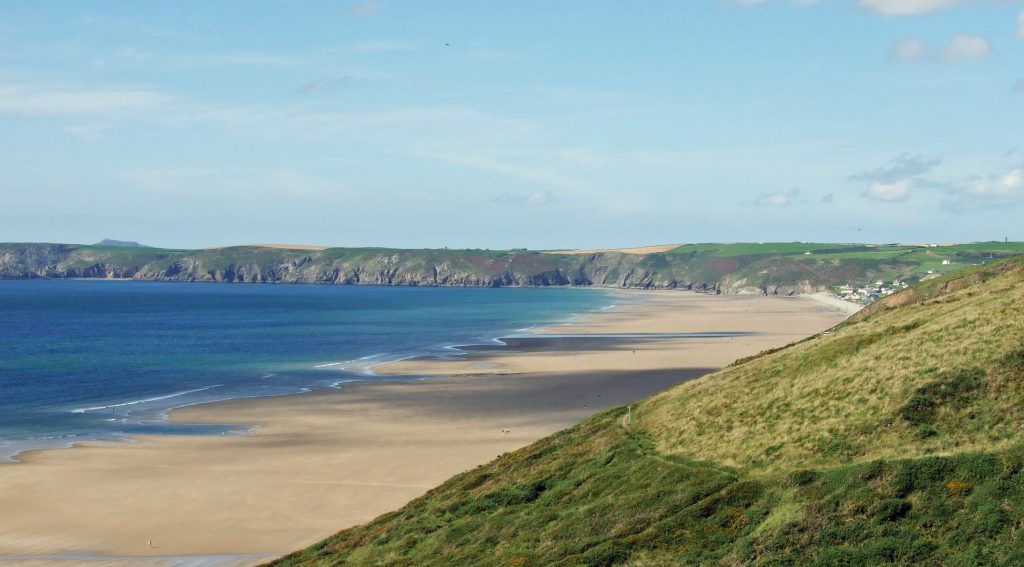 An accessible 2 mile stretch of gently sloping unobstructed sand, ideal for beginners as it has a surf school  and surf hire at the shop on the northern end of the beach, as well as lifeguards patrolling in the summer. Popular with longboarders and paddle boarders as easterly winds are not powerful and conditions are fairly consistent.

The Outer Hebrides are the most north western point of Europe, exposed to the full force of the north Atlantic weather, which over time has shaped these islands into some of the most beautiful and dramatic scenes in Britain.  This also means that the conditions for surfing are some of the best in the country, if not in Europe. For an unparalleled experience of quiet beaches, clean and clear water, and stunning backdrops, Lewis offers surfing lessons for all abilities. If you’re thinking the water will be icy, you will be in for a surprise as the Gulf stream makes the water around the Hebrides warmer than most other areas of Scotland, bringing warmer waters up from the Southern Atlantic. Another bonus, there is an abundance of marine life in the Hebrides, from seals and seabirds, to  porpoises, dolphins and whales at the right time of year.

The U.K. has a surf spot for everyone, whether you’re a beginner wanting to learn, or an expert. Whether looking for some seriously beautiful and dramatic spots with no crowds, or a more accessible, vibrant and bustling beach near a town, the U.K. has both in spades. Don’t forget to pack your Anaskela travel towel and go! 7 Best Kitesurfing Spots in the USA

A roundup of the top 7 kitesurf spots in the USA.